1. APOLOGIES AND ACCURACY OF MINUTES

Accuracy: JS said that he would sign the Minutes as a true and accurate record of the meeting held on 08 DECEMBER 2010.

6.            Land at West Quay Road (Mixed use regeneration and new public quayside to include; the demolition of a listed gate post and all existing buildings on site; the redevelopment of the site with 440 residential units provided in six apartment blocks with basement parking and courtyard) – No new developments

1 Cliff Drive (Addition of four additional windows where there was one large one before) – retrospective application lodged on 17/12/10.

15A Westminster Road – the railings have been removed and fence set back from the road side to permit planting in front of it.

17 Over Links Drive (Application to demolish existing and erect 2 detached houses granted on 31/01/08 but number of conditions should have been complied with before this development commenced) – No new developments.

55 Canford Cliffs Road (Removal of the gates, railings, fence and hedge, and the erection of a low stone wall with planting behind) – ditto

24 Ravine Road (Overhang on right hand side of garage is 800mm but should be 200mm) – Retrospective application refused on 26/10/10. A revised application, for the whole development as it is being constructed with the over-hang, but requiring a detailed arboricultural impact assessment on the trees be included was requested on 29/12/10.

Land adj to 20A Chaddesley Glen (Land be reinstated) – No new developments.

Poole Partnership: – Nothing to report.

Chairman’s note: I will be attending the next State of the Area Debate (an annual meeting of the Council jointly organised with Poole Partnership) on 07/03/11 to “continue to build on the discussions”, following ‘A Partnership Response to the cuts in Poole’ meeting on the 24/11/10.

Council Tax 2010/11 & Council’s Budget Monitoring report: JS said that he was unable to report on the Council Budget Monitoring (1 April 2010 – 31 November 2010), as this has not been included in the Agenda for next Tuesday’s Cabinet meeting.

Possible Charitable Status for Assn: JS has still to set up a small Sub-Committee to look at this.

Canford Cliffs Play Area/Pinecliff Gardens (Sunken garden): JS said that, in the absence of comments, in relation to the Heads of Terms received from Poole Council Asset Management & Property Services Unit for the basis of the Licence for the Sunken Garden the Assn would reply confirming its agreement to this.

Localism and Decentralisation Bill: The second reading of bill is due to take place next Monday 17th January. A report being presented at next Monday’s Standards Committee says that says it is anticipated that the Draft Localism Bill “will receive Royal Assent some time in the late Autumn of 2011” but in a note to            JS/TS Terry Stewart dated 04/01/11, Robert Syms said that “I cannot see why it should not get Royal assent in summer..I will ask Government whips when we get back next week”.

JS reported the application for Land at 8 Buccleuch Road (Creation of 1 No. new dwelling with 2 No. off road parking spaces) had been red-carded by Cllr Sorton, if the planning officer is not minded to refuse this.

There was a general discussion about the new BoP Planning Application website. Some members did not find the system ‘user friendly’. Some found it very slow in the evening. SA said that he accepted the necessity to log in to register representations but was concerned that insufficient time was allowed before those using the website were cut off as it had ‘timed out’.            JS said that Keith Pegram, Projects and Performance Manager, for Planning and Regeneration Services welcomed feedback from users of the site.

7 Ventry Close (Erection of 1no. dwelling and rationalisation of garage accommodation to no 7 Ventry Close) – Application registered on 15/10/10. Revised site location plan lodged on 03/12/10. Cllr Sorton has red-carded this application, if the planning officer is not minded to refuse this.

8 Shore Road – BPCCRA will continue to monitor possible tree work application.            An entrance has been created on the Haven Road side of this property. This property is up for sale at is ‘offers’ in excess of £2m.

60A Kings Avenue (Tree Replacement Notices to replant 3 Scots Pines) – Confirmation awaited that the Council’s Arboriculturist visited both 60 and 60a to check tree issues and that letters sent to the owners requesting planting under Treework/Planning conditions.

Parking meters on all roads on Sandbanks peninsula – Cllr May Haines told the meeting of the Council’s proposal to install parking meters on all the roads on the Sandbanks peninsula. She pointed out the Council feel they need to do this to generate some much needed income. However, people who live on the peninsular and people who need to use it regularly for parking (e.g. the National Trust volunteers at Brownsea Island) have a different view.. Cllr. Haines has put together a form for members at the meeting to comment on and sign – i.e. ‘for’ ‘against’ ‘neutral’.

The Council have estimated that the capital cost of installing these meters is £58,000 and hope to raise £54,000 on an annual basis. Cllr. Haines’ proposal to the council was that they increased the amount of an annual beach parking permit, which has been at the same amount, £65 per annum, for a number of years.

This matter will come up at the next Canford Cliffs & Penn Hill Area Committee meeting on January 26, at Branksome St. Aldhem’s, Parish Centre and is open to all.

Distribution of Minutes – JS informed the meeting that presently there is a distribution list of some eighty members who receive their minutes, etc, by ‘snail mail’ at a cost to the Association of between £80 and £100/month, and the feeling is whether this cost is justified. The first idea is that a note be put in the minutes, asking if those who wish to continue receiving them ‘opt-in’. This may reduce the numbers on the ‘snail mail ‘mailing list.

He then opened this up to discussion.            SA suggested that if this practice is continued people should re- register each year, ensuring the an accurate data base can be kept of members details and avoiding wasting postage. Cllr. Sorton suggested that if people ‘opt-in’ they should make a contribution towards the costs

There was a suggestion that the minutes be available in the library.

As this whole issue was rather complicated, JS suggested that it could be brought up at the AGM and a decision can be made then.

Harbour Heights will be showcasing wines from the Family-run winery of Lupe-Cholet on Friday, January 21st 2011 at 7pm.

Guest speaker, Francois Denis will be talking guests through the fine wines of Burgundy which will be served alongside a seven-course tasting menu compiled by Head Chef Norman Cook. 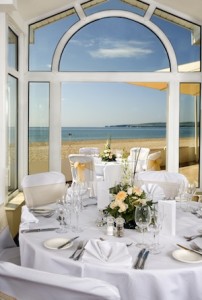 The FJB Hotels, comprising of The Sandbanks Hotel, The Harbour Heights Hotel, The Haven Hotel on the Sandbanks peninsular and the Chine Hotel in Bournemouth, are holding a wedding fair on Sunday 9th January form 10:00 to 16:00.

Don’t miss the stunning and unique display of examples of wedding table settings, bridal suites and sample menus for the wedding breakfast as well as recommended suppliers in all the hotels to help with all those arrangements for this special day.

BUT even more, the FJB Hotels are also having a competition to win a wedding at the FJB Hotel of your choice during this day only. All you have to do is answer four questions, one on each hotel, and if you get them right you will be entered into this draw to win a fantastic £1000 wedding package. Everyone that visits the Fair will be given the questions, full details of the prize and what it contains etc so don’t miss this great opportunity.